So Apparently theres a Beef going on with Madchild and Snak the Ripper.

Vancouver, BC – It’s been a heated week for a couple of Vancouver’s prolific rappers. After BAXWAR general Madchild made mention of Snak The Ripper via Twitter late Wednesday night tweeting “Snak the rippers name should be Snak the loud mouth piece of shit talking punk bitch…There, I got that off my chest” Snak has fired back with a diss track titled “Assisted Suicide”.

While Madchild has been a vocal supporter of Snak and the SDK movement there is no indication on what Snak initially did or said to piss Madchild off. Wasting no time on his retaliation, the track has Snak making clear mention of the tweet, how it was deleted after two minutes and how Madchild called right away to apologize. Snak also backs up the humble apology up by including Mad’s voicemail at the end of the track.

The name “Assisted Suicide” speaks for itself as Snak spits hateful bars on Madchild’s TeamBackpack disaster, his hidden drug-use and showing him up on his own track – alongside a long list of other well executed disses. Ouch. How Madchild will respond; will he keep quiet or fire back? 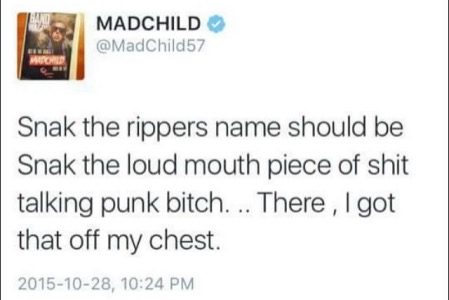